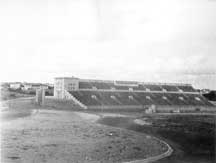 Close your eyes and listen.
Can you hear it?
The rumble on the field.
The roar of the band.
The fans’ frenzy.

You can probably smell the hot dogs, too. After all, Amon G. Carter Stadium is one of those places where the sights, sounds and smells never leave your memory.

When it opened in 1930, awestruck onlookers called it “magnificent in its beauty and magnitude.” TCU had reached the big time. It had its own stadium.

Through the years, it has seen its share of heroes: Slingin’ Sammy, Little Davey, Ki, Dutch, Abe, The Rusk Rambler, Bob Lilly, the Unbelieeeevable Frogs of ’84 and LT.

It has also hosted big games: conference showdowns, legendary upsets, bowl contests, even a “Game of the First-Half Century” in 1935.

It’s been a remarkable span, especially for a stadium that might never have been built had the Frogs not been invited into the fledgling Southwest Conference in 1922. But tiny TCU — barely 1,000 students — was included, and the following season, the Frogs began conference play with SMU, Texas, Arkansas, Texas A&M, Baylor, Rice and Oklahoma A&M, all schools they had faced off and on since fielding their first squad in 1897.

With annual games against notable regional opponents, crowds began to overflow at the old Clark Field — basically two wooden bleachers of 25 tiers enclosed by a wood fence east of University Drive. Even adding stands in the end zones wasn’t enough to meet the demand. By 1927, TCU trustees voted for a stadium and created the Athletics Committee to study the cost and figure out how to pay for it.

Meanwhile, the football team had superb timing, winning its first SWC crown in 1929, the same year the committee recommended that the university start a “quiet campaign” headed by Fort Worth Star-Telegram publisher Amon G. Carter to raise $150,000 for a stadium to seat roughly 30,000. 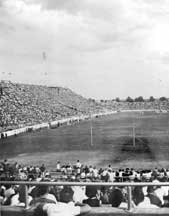 Carter upped the ante. He suggested that Fort Worth residents raise 60 percent of the money for a stadium. Eventually, the sides settled on selling mortgage bonds to construct a $350,000 stadium that would seat 27,000 but could be expanded to 60,000.

The Horned Frog yearbook chronicled the event: “Fighting before a crowd of approximately 15,000 spectators, the Christians unleashed a vicious and unstoppable attack on the Arkansas Razorbacks, sweeping the Frogs to a 40-0 victory.”

It was a crowning achievement, the perfect dedicatory battle. 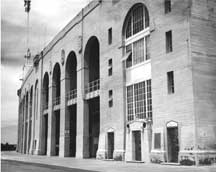 In the years since, the grand old stadium has inspired Fort Worth and generations of TCU faithful as it did the Horned Frog Eleven on that first home game. And the university, recognizing the importance of football to the institution’s history, has expanded Carter’s vision.

It’s our campus treasure. Through wins and losses, memorable seasons and forgettable ones, Amon Carter Stadium is a reflection of the university’s heritage.

What will the next 75 years bring? No one knows for sure. But as surely as coaches, players and teams have come and gone, and new ones will battle on its surface for decades to come, this hallowed ground will always be home of the Fightin’ Horned Frogs of TCU.