TCU’s Institute of Behavioral Research has been researching drug abuse and treatment for 35 years. It also seems to be an expert in helping repair lives.

TCU’s Institute of Behavioral Research has been researching drug abuse and treatment for 35 years. It also seems to be an expert in helping repair lives.

Researcher Danica Knight’s new office in the old Colonial Cafeteria on Berry Street is tidy and inviting; her two young children grin from picture frames on the desk.

Knight ’90 MA (PhD ’91), who has been studying ways to improve drug abuse treatment at TCU’s Institute of Behavioral Research since 1992, says she has the best of both worlds; she works part-time and mothers full-time.

But ask her about First Choice, a residential drug treatment center for women that she has been studying, and you’d think she had nothing else in her life — facts and statistics and research results pour out unencumbered.

For Knight, it’s more than a bunch of numbers with words wrapped around them. She knows the numbers have names like Sami and Rhye, Yvette and Bryan. She’s been there, talked to the women, heard about the abuse, and the pain. And the shame.

That’s why Knight collects and studies and pours over those numbers. To help women like Sami write new, happy endings.

I remember the exact day, the exact hour I came here. I’d just detoxed from heroine and cocaine. I’d smoked pot every day for 23 years. I drank on a regular basis and used heroine and coke mixed for the past five years. I’d always managed. I held down a good job, I stayed clear of the law, I took care of my son. But by age 40 I had a $700 a day habit and had been arrested four times in six months for doing what it takes to get my drugs. At the end, my mother came to say she was going to take my son. I weighed 100 pounds. I got into detox where they told me about First Choice. I came up every day for three weeks begging them to let me in, crying, ‘I’m going to die if you don’t get me in here.’ On Oct. 9, a spot opened up. Rhye and I stayed seven and a half months. 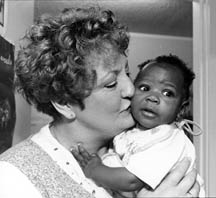 Sami shifted in her seat and looked up with clear eyes and a gentle smile. She is no longer ashamed to tell her story. She’s heard worse. She knows now that her addiction is a disease, not a character flaw. And that with help, it can be beaten.

Sami’s office at First Choice is a cheery place with colorful posters and pictures of her son Rhye, now 14. After leaving First Choice in 1997, Sami trained to be a chemical dependency counselor and then returned to help. She now counsels and coordinates aftercare for the center’s residents.

In 1995, First Choice Director Paula E. Hood heard about a counseling manual produced by TCU’s Institute of Behavioral Research. An internationally recognized research center, IBR has been evaluating the effectiveness of drug abuse treatment programs since 1968.

When approached by Hood, IBR Director D. Dwayne Simpson and Deputy Director Lois Chatham suggested they had more to offer than a manual. Thus began a five-year collaboration that has produced a body of research, major funding for both institutions, additional training modules and an expanded, more effective program at First Choice. 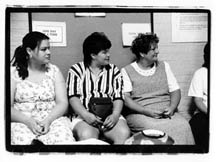 “This kind of evaluation can be time consuming and burdensome,” Hood admitted. “I sought out the research because we needed the grant money the [federal] Center for Substance Abuse Treatment was offering. But it turned out that the research itself was as important to the development of the program as the money was.”

It was a lot of money — the five-year grant totaled more than $4 million. It allowed First Choice to double their occupancy from 10 to 20 apartments and offer expanded services.

Hood, who now has a private counseling practice, would later say it only worked because the IBR staff was patient and persistent during the training process, often spending many one-on-one hours helping ease the transition. A few months later the bulky evaluation process was smoothly integrated. 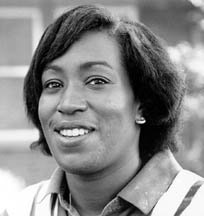 I started using drugs at age 30. One night I found some crack cocaine in the bathroom and was really angry because my boyfriend, a professional boxer, and I had been going to schools and churches and talking to kids about not using drugs, and here he was using drugs and I didn’t know it. I flushed it down the toilet. Well, his first reaction was to hit me. It was a real bad experience. He beat me up that night and kept telling me to use. I wouldn’t. All night this went on until he wrapped a telephone cord around my throat. I thought I was going to die. I finally gave in. I eventually got away from him, but not the addiction. A few years later, I told my mom that I should have just let him kill me that night because either way, I was dead. That’s how I felt because of the drugs.

Yvette’s enthusiasm for First Choice spills out in rapid-fire words. She and 5-month-old Bryan have been there since February, a month after Bryan was born with crack in his system. She’s clean and clear now, finally, and plans to stay several more months to work on the internal problems that landed her in this predicament.

Research has shown that most drug abusers have a wide spectrum of psychosocial, emotional and physical problems which must be treated in conjunction with the substance abuse. This makes rehabilitation a complex task.

When the first bits of data began to flow in, it was apparent that some of the women’s and children’s needs were not being met. That information did not come as a surprise.

First Choice staffers had long recognized their services had gaps, but without empirical data, deciding what was needed, by whom, and when, was based on conjecture or anecdotal information.

“For example, ” Hood said, “We knew there were physical and sexual abuse issues, but the research showed 90 percent had been abused — an even greater number than we suspected. So we added more services in that area.” The numbers have been useful in some unexpected ways. Barbara Brown, First Choice director since January, said they often must act as advocates to the court or other agencies and having hard facts to back them up makes a big difference. Sometimes they even have to keep law enforcement agencies from incarcerating the women.

“We can go to court and say, ‘You can’t do this, research shows they need to stay right here,’ ” she said. “These women have bottomed out when they come here, and we need to do everything we can to keep them in a safe and nurturing environment until they are ready.”

Sami didn’t know about Knight’s numbers when she arrived at the First Choice doorstep, but they sure impacted her life: She was housed in one of the 10 apartments added in the expansion.

And when Yvette talks through her abuse, she doesn’t know that her counselor is using a manual and knowledge Knight and her colleagues developed from the IBR studies. She just knows it helps. She just knows she feels safe now, and filled with hope.

“Our program was good before,” Hood said. “But this collaboration with IBR did so much. They raised our level of professionalism, allowed us to expand services and meet needs better, they even helped us as therapists on how to work best with people — and that was just on the peripheral.

“IBR has been there for 35 years. They know what they’re doing. We were very fortunate to have IBR.”